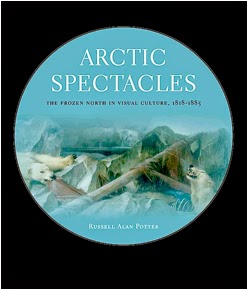 Russell A. Potter
Arctic Spectacles: The Frozen North in Visual Culture, 1818-1875
University of Washington Press: 2007
A volume that illuminates the nineteenth-century fascination with visual representations of the Arctic, weaving together a narrative of the major Arctic expeditions with an account of their public reception through art and the mass media. In a century that saw every corner of the globe slowly open to the examining eye of Western science, it was the Arctic - remote, mysterious, untamable - that most captured the imagination of artists and the public alike. The author draws on the illustrated press, panoramas and dioramas of the era, as well as often overlooked ephemera such as handbills and newspaper advertisements.
Paperback, 258 pages, 26 x 22 cm, black and white illustrations throughout, 13 colour plates.
ISBN 9780295986807
£35.00

Read a review: http://www.polarworld.co.uk/arctic_book_review_potter.htm
Posted by NANCY CAMPBELL at 03:43 No comments:

Email ThisBlogThis!Share to TwitterShare to FacebookShare to Pinterest
Labels: Archaeology, Exploration, Franklin, Literature, Visual Art
Newer Posts Older Posts Home
Subscribe to: Posts (Atom)
The Ötzi Archive is named after Ötzi the Iceman, the well-preserved body of a man who lived around 3300 BCE. Ötzi was discovered in 1991 as a result of glacial retreat in the Ötztal Alps and now rests in the South Tyrol Museum of Archaeology.
The Archive is located in Oxford, UK and can be consulted by appointment.