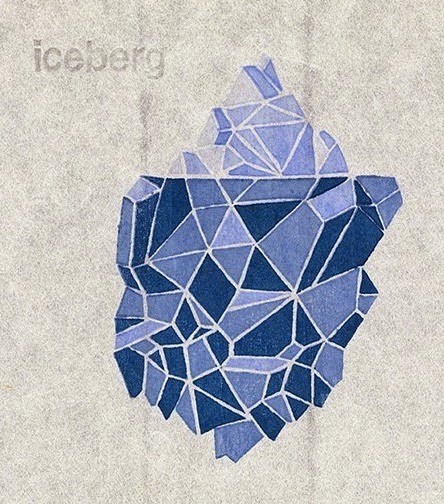 Annie Bissett
Iceberg (from Secret Codewords of the NSA series)
2013
At the height of the global scandal regarding the National Security Agency's acquisition of data, artist Annie Bissett read an article in The New York Times which mentioned the codewords that the NSA uses. She decided to do a series of prints featuring selected codewords, one for each letter of the alphabet, with each codename embossed 'in the spirit of keeping things secret'. It is surely a sign of the times that the word 'iceberg' featured among them. Bissett says that she is unsure what the codeword 'iceberg' signifies, but speculates that it may refer to the fibre-optic cables which travel under the ocean, carrying international internet traffic. Of course, the NSA revelations are often described idiomatically as 'the tip of the iceberg'. Furthermore, Bissett notes, it would appear that the NSA monitored the Copenhagen climate summit in 2009, giving US negotiators advance information on other governments' positions. (Notably, world leaders failed to agree a deal on climate change at this summit.)
Six colours and blind emboss mokuhanga print on kochi kozo paper, edition of 20, 152 x 152 mm.
$50
Posted by NANCY CAMPBELL at 06:59

Newer Post Older Post Home
Subscribe to: Post Comments (Atom)
The Ötzi Archive is named after Ötzi the Iceman, the well-preserved body of a man who lived around 3300 BCE. Ötzi was discovered in 1991 as a result of glacial retreat in the Ötztal Alps and now rests in the South Tyrol Museum of Archaeology.
The Archive is located in Oxford, UK and can be consulted by appointment.